I know everyone like to play new games. Today I will give you top 10 games for android. Lots of good android games like Fortnite, Stardew and also the top leading game PUBG (Player Unknown Battleground­­­) released in the last year.

Rush war is something like a strategy game which mixed with tower defense action. It’s combine with Clash Royale, Clash Of Clans and Brawl Stars all into one game.

Supercell confirmed the new game is on the way and they release the beta version on 26th August. The last Supercell Beta took over 16 months so we did not have any clue when this game might get release

We were still hoping that it would be released in 2020 but some comments from the company say that it will release by 2021. The game is already available to pre-register on Android devices.

it wouldn’t be too shocking to see a release date get announced sooner rather than later.

Next game for Android which I like is Gear POP. Gears POP is a real-time multiplayer battle game.

In this game you build your squad and fight with other players. Destroy the enemy outposts to defeat your opponent and unlock Gear Packs for great rewards.

I played this game before, it’s good but I did not like that much.

Everyone knows about Minecraft it’s very popular and its fan following is huge. Now they are going to launch a new game Minecraft Earth for Android and IOS devices.

In this real world game you can build structures, collect resources for your builds, craft in augmented . You can also play with your friends for mini adventure.

You can play the game but it is in early access, but there is no information when they release the full version officially

It’s a single player adventure game. Start new adventure in Pokemon world and explore all the new island of Pasio.

In this game you need to collect trainers, pokemon. Each trainer has a special bond with single Pokemon.

You need to create the best team to win the Pokemon Master League tournament. You can download this game from your google play store and play with your friends.

So, our next upcoming game for android is Shadowgun Legends. It’s a real-time FPS RPG PVP shooting game with the epic story. This is a sci-fi game with high end graphics.

In this game you will fight with the deadly alien invader for humanity. It has 1v1 and 4v4 battle game mode.

They have more then 700 weapons with customizable features and also 60+ unique armor set you also can customize it with paint, stickers and skins.

The new upcoming game from Gameloft is Project Cars Go. It’s a simulator racing game it is also popular on desktop and console, and now it’s finally coming for mobile devises.

We know that the game has lots of stunning cars and amazing graphics. It is the best racing game on PS4 foe a while, and now get ready for tons of speed on your android devices.

There is a beta version available for both Android as well as iOS users. The closed beta period for Project Cars Go is between 14 October to 27 October 2020.

However, the launch of this beta is only limited to the following regions – US, Canada, UK, and Australia. Players interested to get their hands on Project Cars Go need to register for the closed beta on the official website for the game.

As of right now, the last date for registering for the closed beta is October 13, 2020. The developer still claim it is coming soon in this year.

Now the new game for android in 2020 is EVE: War of Ascension. it is available on google palystore. This game is based upon hallmark EVE Online design principles.

EVE Echoes is a next-gen mobile spaceship MMO game where players will be able to forge their own path to glory within a massive space sandbox environment, forming alliances with other pilots from across the galaxy to shape the game’s persistent universe.

In this game players will be free to engage in interstellar combat, exploration, piracy, resource harvesting, industrial manufacture, trade, as well as many other activities across thousands of solar systems.

It’s a multi class Battle Royale mobile game. I already play this game and I am pretty sure that it will be very interesting and awesome for you, if you play.

In this game you will chose a hero every hero has a unique skill set. You can mount on dragons and team up with friends to crush enemies. You can equip new equipment which receive from players and forge.

The graphics of this game is pretty good so ready for rule the magical 3D world. You can download it from playstore.

Now, finally the Apex Legends is the new upcoming game for android. As we know Apex legend is already popular on PS4, Xbox One and PC now its coming for Mobile devises.

We did’t know when the game will release.

Here is the bonus for you. League of Legends’ fast-paced competitive MOBA gameplay which is coming soon to mobile. It’s a skill-based  5v5 PVP PC game.

This game is very popular on PC. You can pre-register the game on playstore. We did’t know when the game will release. 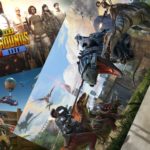