These are some best kingdom building manga with modern knowledge which are recommended by manga readers. Release that witch and Become the castellan in another world are my favorite.

A modern-day engineer is transmigrated to a different world into the body of the fourth Prince. In this world demos and witches who can use magic actually exist. To save the witches and solve the demon conspiracy he uses his modern knowledge and with the help of witches he makes lots of modern and powerful weapons.

In the kingdom no one likes the forth prince, to prove his worth to his family and people he uses his knowledge of the modern world to make people life easy and happy.

English Name: capture a different world with the power of craft games

Kosuke who is a teen age boy found himself in a forest on whole different world. After taking some time he found that he has an amazing crafting ability just like the game from his original word.

After knowing his ability, he makes a shelter in the forest and started living. In middle of the night he meat a dark elf who took him to his village. But the in this world other races didn’t like humans so to save himself by getting killed he started acting like a slave of the dark elf. After reaching the village he starts working. with his crafting ability he makes lots of new things for villagers to help them.

Protagonist Tomokui Kanata met a girl got Kirimine Aoi who is like his sister but she killed him. After death he got reincarnated in another world as a goblin in a small goblin village. To not to get killed by humans and other monsters he needs to make himself strong.

He also has a skill called ‘absorb’. when he eats any monster, he gains the skill of that monster. Because of that he gains lots of skills and become powerful the other goblins also started to fallow him.

The story starts with a man who died in a car accident and got reincarnated as a young boy in a different world. After reincarnation he meat a legendry griffin. Griffin took him near a cave where some opheran children are living. Griffin give him the work to take care of the children.

He uses his modern knowledge to make there living better and become the leader of that group. He also invented lots to machines and developed new methods for cultivation. Because of his achievement king make him a noble and gave him a small territory.

After seeing his power and knowledge the king adopted him as his son and declare him the next king of his kingdom.

English Name: Become the castellan in another world, Starting from today I will work as a city lord

The manga start with a noble man who sold his poorest village to the protagonist. To make the village condition good and make it powerful against invaders he uses his knowledge of another world. He turns his poor village into the strongest kingdom and the hub of future technology.

Fushi no kami: civilization start with village is a new anime which is little similar to Release that witch. In this manga mc died and reincarnated in another world as a baby with modern knowledge of the earth.

He lives in a very small village with his parents, to get a good knowledge of this new world he started reading books. He uses his modern knowledge to make the village condition good. He also makes lots of new products, machines and implemented new technique in agriculture.

In this process he founds out that the ancient era people of this world were more knowledgeable and used modern technology as compare to this era people.

Saving 80000 gold in another world for my retirement

Saving 80000 gold in another world for my retirement is one of the best manga in terms of kingdom building in this manga protagonist can teleport between earth and other world. To live easy life, she needs lots of money, so she opened a general store in another world and selling modern stuffs.

Because of modern stuffs she become more popular among nobles. In war against invaders and demons she helps the king and become the noble and get a small village to manage as his territory.

She makes his village more productive and popular by using his modern knowledge and stuffs.

English Name: I Won 4 billion in a lottery but I went to another world

So, he decided that he will help the people of this world to learn the knowledge of the modern era. In between that he found out that he is not the only one who come earth to help them.

Tagami Yuusuke, led by a mysterious voice, is summoned to another world, ’Caltsio’. He was just a young video game lover, but fate decided to make him become the “evil god of calamity” of this world, obtaining the ability to create and customize everything.

After reincarnation he meat the old man and started living with him. Because of his knowledge and the power of customization he makes lots of new modern era things to help people of this world.

A middle-aged engineer who was weary of his life ended up being reborn into a different word as Zack, the son of a feudal lord. Once there, he received a mission from god.

He was told to prepare himself for the task of guarding the future hero of the world. With that in mind, Zack not only train himself in swordsmanship and magic but also committed himself towards the reforming problems like hygiene and education.

After developing a new local product, Zack was reminded of his once forgotten dream, brewing alcohol. As he resurrected his long passion, it was the beginning of his dream

After a long day of labor, Masaru who works for a rural home improvement store, died. After death he got reincarnated in a word where skills, monsters and other races are lives. After reincarnation he meat with goddess and he get the skills by gacha system which is totally depend on his luck.

He gets lots of skills which are mostly based on crafting and dismantling type. After that he meat a bunny girl who took him to his village.

After seeing the condition of the village, he decided to develop the village and turn this village into a modern city where everyone can live happily without worrying. 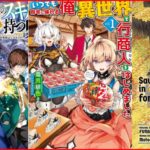 Manga where mc can travel between two worlds 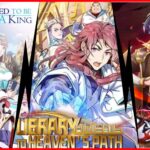